Showing posts from March, 2016
Show all

Mary At The Cross 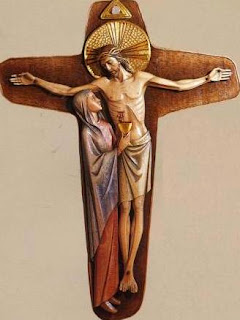 “So they took Jesus, and he went out, bearing his own cross, to the place called the place of a skull, which is called in Hebrew Golgotha. There they crucified him, and with him two others, one on either side, and Jesus between them But standing by the cross of Jesus were his mother, and his mother’s sister, Mary the wife of Clopas, and Mary Magdalene. When Jesus saw his mother, and the disciple whom he loved standing near, he said to his mother, “Woman, behold, your son!” Then he said to the disciple, “Behold, your mother!” And from that hour the disciple took her to his own home.”   ( John 19:17-18, 25-27 ) It is only John’s gospel that tells us that Mary was at the cross. Only John who recorded the dying words of Jesus addressed to his mother. It was only John because he was there too. It seems odd, even a bit cold, that Jesus would call his mother “woman”. But this one word carries so much weight. Eve was the first woman and it is by “woman” that she is addre
Post a Comment
Read more
More posts