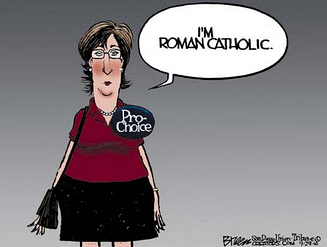 The Huffington Post recently published an editorial my Rea Nolan Martin titled, “Proud to be a Cafeteria Catholic”. Brandon Vogt of Word on Fire did a great job of critiquing the piece. But the HuffPo piece, along with recent stories showing growing numbers of Catholics ignoring the Church on issues regarding marriage and sexuality got me thinking about that “get out of jail free” card that gets played so often: conscience.

Nolan Martin writes, “To be a cafeteria Catholic is a good thing if it means you are putting your conscience first. As long as your conscience is in good shape and your ego is in check, it works.” It’s the same kind of thing you hear coming from pro-choice “Catholics” defending their acceptance of abortion, or the myriad of Catholics rejecting the Church’s teaching on birth control. They all claim that as long as they are following their consciences they can’t be wrong, and are even being good Catholics for doing so. Conscience is king in the arena of morality, and apparently it is above reproach; at least for those using it to defend their position. They’ll even quote Church documents, writings of the popes or the Catechism to support their right to follow their conscience.

To be fair, the Catholic Church does hold one’s moral conscience in the highest regard. It also teaches that, “A human being must always obey the certain judgment of his conscience.” (CCC #1800) Does this mean that those who dissent from the teachings of the Church are correct in doing so? Not exactly. Before you get to this passage on the absolute authority of the conscience in the Catechism you have to read quite a bit about the moral duty each person has in properly forming their conscience.  It reminds us that “Conscience must be informed and moral judgment enlightened” and that the process of educating the conscience is a “lifelong task”. Especially as Catholics we have a duty to allow our conscience to be enlightened by scripture, formed by the cross and “guided by the authoritative teaching of the Church.” (CCC #1783-1785)

So what does it mean to form and follow your conscience? And what exactly is your conscience anyway? The Catechism, quoting from Vatican II states, "Deep within his conscience man discovers a law which he has not laid upon himself but which he must obey. Its voice, ever calling him to love and to do what is good and to avoid evil, sounds in his heart at the right moment. . . . For man has in his heart a law inscribed by God.” (CCC# 1776) Conscience is not Jiminy Cricket telling you what to do. It’s not an angel, one on a shoulder and a devil on the other arguing. The conscience is the law of God inscribed in our hearts. Each and every person, made in the image and likeness of God has this law written on his heart. It’s what St. Paul appeals to in the first chapter of his Letter to the Romans.

If everyone’s conscience has the same source being God the Father, how can so many people claiming to follow their conscience arrive at so many different conclusions? Because, we can fail to form our conscience and allow it to grow in ignorance and error. It simply cannot be that equally formed consciences can arrive at opposing concepts of good and evil. If they are rooted in God, one is true and the other mistaken. One is worthy of trust and the other is suspect.

The Catechism points out that this happens when someone “takes little trouble to find out what is true and good, or when conscience is by degrees almost blinded through the habit of committing sin.” (CCC #1791) We live in a culture that begins in childhood with an unrelenting bombardment of messages and images aimed at killing the conscience, at re-educating it to believe that whatever seems desirable must be good. Pleasure and avoidance of pain/discomfort is the purist and highest good to be sought. Taking the path of least resistance is not sure grounds for forming a morally correct conscience. Willful ignorance or obstinate rejection of the teaching of scripture and the authority of the Church does not give carte blanche permission to do what you will in the name of conscience.

I was recently listening to a Lighthouse Catholic Media CD in the car and the person speaking mentioned an analogy someone used to explain the teaching authority of the Church. Imagine if you will that the Founding Fathers of our nation were able to print vast numbers of copies of the Constitution. Then these copies were evenly distributed to every household and the people were told that they were free to read the Constitution and apply it as they interpreted it. Chaos would reign. Rather, the Founders were wise enough to know that a competent body would be needed to authoritatively interpret the meaning of the text. In the same way, but with the promise of divine and infallible protection, Christ established the Church and gave the Apostles and their successors the task of keeping and authoritatively interpreting Divine Revelation. This is why we can trust the Church to guide us in forming our conscience.

I know myself. I know that given the chance I will look for the loophole. I will try to twist the facts and circumstances to justify my wants and desires. I know that I am more than capable of manipulating my conscience, and if given enough time deadening it altogether. Like a goldfish complaining about the bowl and wishing to be free to walk about the room, I would die if allowed to seek the “freedom” of pleasure at all cost. Praise God that he has given us his Holy Spirit and his Church to lead us in the paths that lead to life eternal.
culture discipline faith