By Tom Ponchak Tom Ponchak June 28, 2015
The lectionary readings we hear every Sunday at mass are predetermined and rotate on a three year cycle. I am always amazed at how timely they can be.

Last week’s Gospel told the story of Jesus calming the wind and the waves. Jesus told the apostles to get in the boat and go to the other side. On the way a strong storm blew in and tossed their boat. Seasoned fishermen who were well accustomed to sailing that same lake feared for their lives that the boat would sink. All the while Jesus was peacefully asleep. When they woke him he rebuked to storm and it became calm immediately, then he rebuked them for their lack of faith. 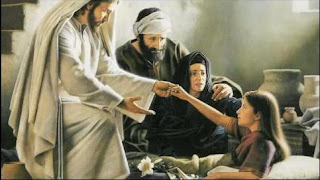 This week’s Gospel features the story of Jairus’ daughter and the woman with a hemorrhage. Jesus and the apostles are met by Jarius, a leader of the local synagogue. He pleads for Jesus to come to his home and heal his daughter who is deathly ill. On the way a woman who had suffered from bleeding for twelve years reaches through the crowd hoping to touch just the hem of Jesus’ garment so as to be healed. While Jesus stops to confront her and commend her for her faith friends of Jairus deliver devastating news, his daughter has died. Upon hearing this Jesus tells Jairus, “Don’t be afraid; just have faith.” They continue to Jairus’s home and Jesus raises his daughter from the dead.

These readings are the perfect bookends for the tumultuous week we’ve just been through. In the aftermath of the Supreme Court’s decision on gay marriage many Christians are fearful of what the future holds. Will we see an increase in the secular culture’s push back against religion in general, Christianity in particular, and especially Catholicism as church’s and ministries fail to change their definition of marriage? Will religious institutions run the risk of losing their tax exempt status? Like the apostles on the boat, many of the faithful feel the weight of the wind and the waves. Looking at the White House, Niagara Falls, and the Empire State building lit up in the colors of the rainbow to celebrate the decision makes it seem that any hope for preserving traditional marriage is gone. Just scrolling through Facebook, watching ads on TV, movies, television programs, the evening news, and com boxes on websites can certainly leave you feeling hopeless and defeated; just as Jairus likely felt when his friends told him his daughter was dead. 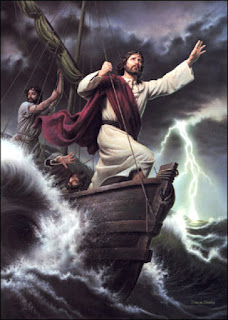 We must look to the Gospels and Jesus’ words and actions as our example of how to react when the storms of life and impossible odds seem aligned against us. We serve a God who is in control and because of that we must not fear. We must not give in to despair. We must have faith and believe. Only then will we get to see the glory of God. From age to age the people of God have always faced the same enemy: Sin, the World, and the Devil; and through every age the Church still stands. Jesus rebuked the disciples in the boat because he told them BEFORE the storm that they were going to the other side. He told Jairus not to fear because BEFORE his daughter died Jesus had decided that he would heal her. It is so easy to allow the storms to distract us from the mission, to forget what we were told BEFORE the storm. “I have told you these things, so that in me you may have peace. In this world you will have trouble. But take heart! I have overcome the world.” (John 16:3) Like the old song goes, “He’s got the whole world in his hands.”

Finally, don’t forget the words of Psalm 2 when you are tempted to worry about what the world may be plotting.

Why do the nations conspire
and the peoples plot in vain?
The kings of the earth rise up
and the rulers band together
against the Lord and against his anointed, saying,
“Let us break their chains
and throw off their shackles.”
The One enthroned in heaven laughs;
the Lord scoffs at them.
bible commentary culture faith hope