Learning from John the Baptist 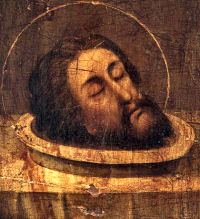 Today is the feast of the beheading of John the Baptist. One of the reasons Catholics recognize and honor saints is because their lives serve as examples for how we can imitate and follow Christ. We look to the saints to learn from them. So what can we learn from John the Baptist?

Humility. Several of John the Baptist’s followers came to him concerned that the crowds were leaving John and following Jesus. John’s response was, “He must increase, but I must decrease.”  (JN 3:30) This is the perfect expression of both humility and the ultimate goal of the Christian journey. Every day we are faced with this decision, do I follow my path or Christ’s? Do I seek my glory, or Christ’s? This is what it means to die to ourselves, to take up our cross and follow; it means that everything in me must yield to Jesus. Think about the sacrifice John made. Before Jesus came on the scene he was the main attraction. People traveled from all around to seek him out. Surely he wasn’t doing his ministry for the purpose of seeking fame or recognition, but he was human. Suddenly Jesus appears and the throngs of followers leave John to follow the new guy; and John encouraged them to go. I wonder how many leaders of big ministries and movements within the Church today would be so willing to lay it all down?

Commitment to the Truth. John the Baptist was ultimately arrested and beheaded because he refused to allow King Herod to make a mockery of marriage. Herod lusted after his brother’s wife, Herodias. He divorced his wife and had Herodias divorce her husband, Herod’s brother, so they could be married. This was a violation of Jewish law and the marriage covenant. John preached against Herod’s behavior and his marriage to Herodias. Rather than choosing to repent, Herod had John arrested. Later consumed with lust for Herodias’ daughter, Salome, Herod promised her anything and she asked for John’s head on a platter at the prompting of her mother. I can’t think of a more timely model for our age than John the Baptist. We live in a society that has rejected God’s plan for marriage through easy divorces, same sex unions, and wide spread cohabitation before or in place of marriage. Ours is a culture that embraces lust, violence and death. It is a culture that would rather mock and persecute God’s children than repent and accept his mercy for themselves.

Faith Seeking Understanding. “Are you he who is to come, or shall we look for another?” (MT 11:3) This was the message John sent from his prison cell to Jesus. It seems odd that John would have doubts about Jesus. After all, John witnessed the heavens open and heard the voice of the Father when he baptized Jesus. John proclaimed that Jesus was the “Lamb of God who takes away the sins of the world.” John announced Jesus as the Messiah. But now, sitting in a cold, dark, lonely prison cell John sends some of the few followers he still has left to ask Jesus if he really is the one. Why? I don’t know about you, but sometimes God doesn’t always follow my plans. He doesn’t always do what I expect of him. Sometimes, he does things that I don’t understand. I think that’s what John was struggling with from his prison cell. I think that John had a certain idea of what it would mean when the Messiah came, and his ideas and his reality were out of synch. I think the other lesson here is that it is okay to ask God what he’s up to; that having doubts is not incompatible with having faith. Our faith should always seek understanding so that it can form deep roots to hold on to when troubles come. John asked and Jesus answered, then Jesus went on to hold John up as the” greatest among those born of women.” (MT 11:11)

So as we commemorate this feast day today, lets us pray that we can imitate John the Baptist in humbly seeking after God, boldly holding to the truth whatever the cost, and always seek to strengthen our faith by seeking a deeper understanding of God and his ways.
doubt faith humility marriage saints