Living in the Right-side Up 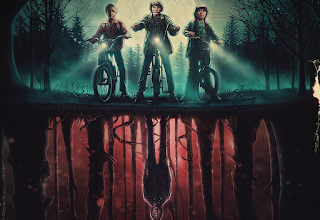 “Christ Jesus is the image of the invisible God, the firstborn of all creation. For in him were created all things in heaven and on earth, the visible and the invisible, whether thrones or dominions or principalities or powers; all things were created through him and for him.”
Colossians 1:15-16 (Second Reading from 15th Sunday of Ordinary Time – July 10, 2022)

I must confess that I love Stranger Things, the streaming series on Netflex*. If you’re not familiar with Stranger Things, it’s a sci-fi/horror show set in a fictional Indiana town in the mid-80’s where our core group of characters battle evil forces from the Upside Down, another dimension that is a corrupted copy of their own world. I love how they’ve nailed the whole 1980’s vibe from the music to the clothes to the freedom we had as kids to roam the town with little parental supervision. The storylines are suspenseful, and you get attached to the characters. The primary hero figure is Eleven, a girl with telekinetic superpowers.

After binge watching Season 4 recently, I found myself reflecting on some of the deeper themes of Stranger Things and their connection to theology. At the same time, I was listening to a Catholic podcast and they brought up a quote from the famous Catholic author Frank Sheed discussing one of the problems with modern Catholics: “When we look at the Universe, we see pretty well what other people see, plus certain extra features taught us by our religion… So that we have not so much Catholic minds as worldly minds with Catholic patches.  Intellectually, we wear our Catholicism like a badge on the lapel of the same kind of suit that everyone else is wearing.” (from Theology and Sanity by Frank Sheed, emphasis added)

This is a theme that St. Paul touches on in his letters, that we as Christians ought to be looking at and thinking about the world differently than those who do not know Jesus because we are supposed to have the mind of Christ.

In other words, that means we need to have a multidimensional understanding of the world in which we live. As we are reminded in the second reading for the 15th Sunday of Ordinary Time (and we repeat every week in the Creed), ours is a world of the visible and invisible. We share this space with other personal beings that we cannot see, and what we do in this physical dimension can have lasting impacts in the spiritual dimension which we also inhabit. Unfortunately, all too often we look at our surroundings and situations just like everyone else. We fail to be transformed by the renewal of our minds.

To truly be Catholic is to have a sacramental worldview, one that is multidimensional. Like the kids in Stranger Things, we are doing battle everyday with evil forces bent on destroying us and our world. While they battle the fictional Mindflayer and demogorgons, we are facing very real demonic beings, principalities and powers. In the fantasy world of Hawkins, IN, Eleven calls upon her superhuman powers to fight the enemy. In reality, we don't have to rely on that one special person because by baptism & confirmation we all have access to superpowers. We have access to heavenly power beyond our imagination by the Holy Spirit to “tread on serpents and scorpions” and to “heal the sick, raise the dead, cleanse lepers, cast out demons”.

What does a Spirit-filled life look like when we daily walk with the mind of Christ? What does it look like when I am aware and mindful that there are angelic beings with me 24/7, that I am never truly alone? How small do my problems look when I am conscious of the reality that I have access to the Kingdom of God here and now?

In a way, all of the fallen world around us is the Upside Down and it's only by allowing the Holy Spirit to renew our minds into the mind of Christ that we can truly live in the Right-side Up of the Kingdom of God.

* I know Netflex has many issues and many shows that are a moral cesspool. I'm not advocating or supporting it. You can also watch Stranger Things on Vidangel.com.